CMHA Kamloops Branch started operating as a non-profit in 1982 under the name Kamloops Cariboo Society. In 1992 we were officially incorporated into the Canadian Mental Health Association. As the only national organization that ensures support to a full scope of mental health, mental illness, problematic substance use, and addiction concerns, we are proud to be 1 of 330 branches across the country!

We know that mental health begins where you live, learn, work and play which is why we provide a wide range of innovative services and supports.

CMHA Kamloops creates awareness, provides education, and supports individuals and families living with mental health or substance use concerns. Our programs are community-based, they include supportive and independent living, homelessness services, and peer support. By working closely with other community agencies, we are working to bridge gaps in mental health care and facilitate access to critical services and resources.

One of Canada’s Oldest Non-Profits

The Canadian Mental Health Association (CMHA) is one of the oldest national, charitable organizations in Canada and the oldest national mental health charity. CMHA was founded in 1918 by Dr. Clarence M. Hincks, Dr. Charles K. Clarke, and Clifford W. Beers as the Canadian National Committee for Mental Hygiene. The original goals of the organization centred around war recruits, mental examination of post-war immigrants, prevention, and support for adequate facilities and care for the treatment of mental illness.

Dr. Hincks became director of the association in 1924. His personal experience with depression and empathy for others with mental illness, coupled with a profound knowledge of medicine and early twentieth-century psychological developments in Europe revolutionized the conditions and treatment of mental health patients in Canada.

CMHA is uniquely positioned in Canada as a charity that brings together experience and expertise on community-based mental health promotion and support for people with mental illnesses. We are unique not only in our approach but also in our ability to speak to a broad range of issues surrounding mental health and mental illness.

CMHA’s BC Division (CMHA BC) was founded 1952, with the assistance of Clarence M. Hincks, and officially incorporated on October 6, 1953. The office started with a federal mental health grant which was gradually diminished over three years as other sources of funding were found. CMHA BC volunteers became involved in the support of patients at Riverview Hospital and ran the thrift store. At one point, CMHA BC had employed more people with mental illness than any division in the country.

Throughout its history, CMHA BC has advocated for changes to legislation and policy affecting people with a mental illness that ensured the availability of community alternatives, access to housing, and income supports. Through this work, CMHA BC has played an important role in the reform of the mental health care system in BC.

CMHA BC is proud to be part of a network of CMHA branches in communities across BC whose grassroots involvement and direct services – such as housing, employment services, crisis lines, and support groups to name a few – have touched the lives of countless British Columbians.

Who We Are Navigation Menu 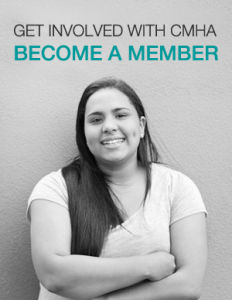